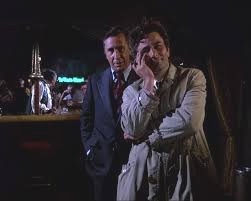 I am quite fond of Bruce Kirby. A fan of mystery shows, I first encountered Kirby on Columbo as Sergeant George Kramer. And then--no great surprise--I encountered him on Kojak where he ambles about the squad room as Sergeant Al Vine. In the trifecta of perfection, Barney Miller--the best cop sitcom ever!--showcased Bruce Kirby as the criminal-or-cop-of-the-week on three occasions.

Born in 1928, Bruno Giovanni Quidaciolu (Sr.--his son was junior), Bruce Kirby has had an extensive career (he was taking parts as late as 2009). As mentioned earlier on my blog, I really admire actors like this! Bearing a similar career history, his son, Bruno Kirby, Jr., appeared with his father in a Columbo episode, "At Dawn's Early Light," playing a young cadet. 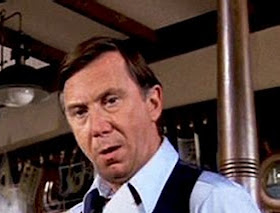 The most endearing aspect of Bruce Kirby is his ability to capture blithe nonchalance. He strolls through an episode with careful insouciance and just a hint of a wink (but never too much; he doesn't steal scenes). He's the kind of actor where the viewer begins to suspect after awhile that he is simply being himself. Since what he is being is utterly adorable, there's no problem!